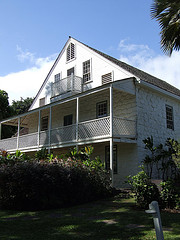 Located in Wailuka, Bailey House Museum is a delightful historical museum. Built in 1833 for missionaries, it was one of the first homes in the Islands built in the New England style. Built from lava rock and painted white wood, the Bailey House Museum stands on land that the last King of Maui, Kahekili donated to the missionaries.

In 1836, it became a women’s seminary where native women were taught Christianity, academic subjects, and household skills, New England style. In 1847, missionaries Edward and Caroline Bailey bought the house and raised their family there. Eventually, in 1957 it became a museum.

The upstairs of the museum displays how the house would have looked when missionaries lived there with New England influenced furniture made of native Koa wood. Downstairs displays include pre-missionary native carved wooden bowls, weapons, and fishing gear. One of the highlights is the tapa cloth display, which is cloth made from pounded tree bark and used for blankets and clothing. It has painted designs.

Also a wooden sculpture of the Hawaiian God, Kamapua is on display. This sculpture predates 1819. In the gardens, native plants grow and a redwood surfboard and a fishing outrigger formed out of a single Koa log are displayed. On Tuesdays, live performances of traditional Hawaiian music can be enjoyed between 10:30 am and 2pm.

Admission Cost
The price of admission for Adults is $5; seniors, $4; children 7-12, $1. Children under 6 are free, as are descendants of the Baileys, museum curators, and members of the museum.