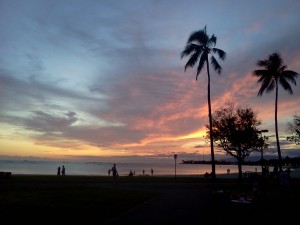 Just because we don’t really notice the change of the seasons here in the land of the endless summer, doesn’t mean that the Fall is a bad time to visit Hawaii. In fact, it’s one of the least expensive times to plan a trip to Hawaii because the period after Labor Day kicks off a shoulder season when hotel occupancy dips a bit right up until the holidays. The combination of beautiful weather and fewer crowds actually makes Autumn one of the best times to visit Hawaii.

>> Help with deciding When to go to Hawaii.

Weather in Hawaii in the Fall

It’s a bit of a novelty to discuss “Autumn” or “Fall” in Hawaii, as we only really have two seasons in Hawaii, Summer and Winter. Summer is generally May through October and will be drier than the winter. Temperatures get a bit warmer, but still nothing extreme. Getting into the low- to mid-90′s is really hot! The tradewinds that serve as our natural air conditioning tend to keep the temperatures pleasant, so if the weather calls for calm winds, be prepared for it to feel a few degrees warmer outside. Dry season average temperatures hover around 85 degrees.

Although hurricanes are quite rare, you will want to be aware of the face that hurricane season runs from June through November in Hawaii. The last major storm was Hurricane Iniki, which caused significant damage in September 1992, especially on the island of Kauai. You have a much better chance of getting beautiful weather than going through a disaster like a hurricane, but it doesn’t hurt to brush up on hurricane preparedness tips for peace of mind, if nothing else. In the unlikely event of a hurricane or other natural disaster, stay tuned to local news and radio for the latest info.

>> More information on Weather in Hawaii

What to do in Hawaii in the Fall

Although it’s not quite whale watching season until December, it’s still a good time for ocean activities like surfing, snorkeling, kayaking, or stand up paddle boarding. There’s almost never a bad time to spend a day at the beach, so stay tuned to the local weather report for the latest ocean conditions. The first big winter swells tend to roll in sometime in November, when surf contests bring out all the pro surfers to Oahu’s North Shore.

Hawaii is very passionate about sports, and the fall is a great time to experience heading out to tailgate at Aloha Stadium when the University of Hawaii Warriors are hosting a football game at home. If you consider yourself a die-hard football fan and can’t miss a game, check out our article on 5 Places to Watch Football in Waikiki. Just keep in mind you’ll often have to get up a bit earlier due to the time difference.

Restaurant Week in Hawaii takes place annually in November just before Thanksgiving. Previous years have seen restaurants on Oahu and Maui offering special prix-fixe menus which give diners a chance to sample some of the best cuisine the islands have to offer at a reasonable price. If you’re a foodie, you must visit the official website for details.

>> More advice on Things to Do in Hawaii.
>> Check out the “Month by Month” section below for specific events on each island in September, October, and November.