Many people head to Kauai for a taste of the laid-back lifestyle and spectacular natural beauty. Often combined as an island hopping trip from Maui, the Big Island or Oahu, Kauai can be a destination all its own. Kauai’s only airport is in Lihue (airport code LIH) on the southeastern side of the island.

Getting to Kauai from the US Mainland 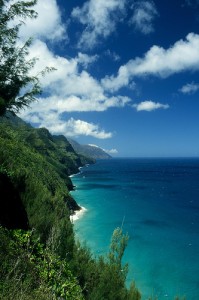 There are currently no budget carriers that fly to Kauai and fewer options for transpacific carriers than Honolulu, so you will often find that to get to Kauai, you are either routed through Honolulu or a connection with a west coast U.S. city. Hawaii is a very popular destination during the winter holidays (mid-November to March) and during summer (June to August) so cheaper airfares and sales will often pop up on the shoulder or off-seasons outside of those times.

Use the tool at the top or bottom of this page to plug in your departure city to test out routes to Kauai (LIH), but keep in mind that you may need to make connections or fly on multiple airlines to get there, so pay attention to the number of stopovers and total transit time if this is important to you.

Getting to Kauai from an outer island

The largest interisland carrier is Hawaiian Airlines, which connects Lihue airport with the Honolulu, Maui, and Kona on the Big Island. Hawaiian does not offer direct flights between Kauai and Molokai or Lanai.

Flights are also available on go! Mokulele which connects Kauai and all of the above, plus Lanai. To get to Molokai, you would need to connect in Honolulu or Maui. They use smaller turboprop jet planes between the islands.

Island Air is another smaller carrier, which provides and additional connection between Kauai and Honolulu. From Honolulu, you can reach all the major islands except the Big Island via Island Air, including Kapalua Airport on Maui.

Getting to Kauai from any other destination

There are no international flights direct to Kauai. From international destinations or most of the U.S. mainland, you will have to make a connection in Honolulu. See this page for more information on flights to Honolulu.