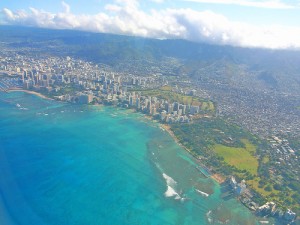 A majority of visitors to Hawaii arrive at Honolulu International Airport (HNL) on Oahu. Chances are that if you’re spending time in the islands, you will either fly into or through Honolulu, so it’s often a good idea to start your search for cheap airfare to Hawaii by looking at flights that arrive in Honolulu. To find the best deal from your city, use the tool above by testing out airports near you. Honolulu International Aiport’s city code (HNL) has already been plugged in for you.

Getting to Honolulu from the US Mainland

There are currently no budget carriers that fly to Hawaii, but many domestic carriers service the transpacific route, which can lead to fares between $350-$400 or so from the west coast, slightly higher (and fewer options for direct flights) from the east coast. Hawaii is a very popular destination during the winter holidays (mid-November to March) and during summer (June to August) so cheaper airfares and sales will often pop up on the shoulder or off-seasons outside of those times.

Check out our indie travel tips for Honolulu.

Getting to Honolulu from an international destination

The most common direct flights from abroad would be from Japan, although various international routes are always opening up new markets. Currently you can also reach Honolulu via Australia, Canada, New Zealand, South Korea, Fiji, Tahiti, and the Phillipines.

Getting to Honolulu from an outer island

Traveling between islands in Hawaii is possible through Hawaiian Airlines and also the smaller regional carriers of go! Mokulele Airlines (a Mesa airlines subsidiary) or Island air, which leave from the commuter terminal of Honolulu International Airport. All Hawaiian Airlines interisland flights arrive and depart from the interisland terminal.

Airlines that fly to Honolulu 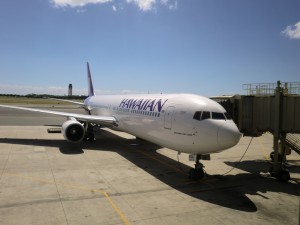 American Airlines has direct connections between Honolulu and Dallas, Chicago, or Los Angeles, as well as Osaka and Tokyo in Japan.

Alaska Airlines recently announced a daily direct flight between San Diego and Honolulu, to begin in November 2011, adding to its flights from various west coast cities.

Other Airlines that fly to Honolulu include: