Unlike most earthquakes and volcanic activity that occur near plate boundaries, the Hawaiian archipelago is an exception to this rule, and are of only volcanic activity—where erupted underwater volcanoes created the island chain in the middle of the Pacific Ocean nearly thousands of miles from the nearest plate boundary.

Although volcanoes and eruptions created the entire Hawaiian archipelago, today only two volcanoes are left active—Mauna Loa and Kilauea at the southeastern most end of the chain of a volcanic “hot spots” that have shifted over the past several million years.

Near the southwestern edge of the caldera of Kilauea is the “fire pit,” which is known as Halemaumau (House of Everlasting Fire). Halemaumau at times has a contained lake of boiling lava. The pit is enlarged periodically by steam blasts and collapsing walls. Typical eruptions consist of lava flows forming lava lakes in Halemaumau or elsewhere on the caldera through fissures and rift zones.

Volcanoes National Park is actually Hawaii’s most visited tourist attraction, with nearly 9,000 visitors coming to the park each day. Here, visitors can camp at Volcanoes National park, hike past the Halemauau crater, check out lava tubes and maybe even catch a glimpse of hot lava.

About the Kilauea Visitors Center 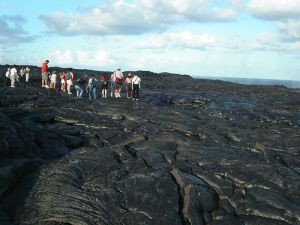 There are several areas within the park grounds that should not be missed. Crater Rim Drive leads visitors around the volcano of Kilauea and allows them see all of the parks main points of interest. Located off of Crater Rim Drive is the Chain of Craters Road. This road ends and visitors can get out of their cars and take a short hike over the hardened lava to view the magnificence of bright liquid lava flowing into the Pacific Ocean.Another area not to be missed is the Thurston Lava Tube. This is a 500 year old lava cave that visitors can walk through and view the rain forest on the other side.

Mauna Loa is not only an active volcano, but is actually the largest volcano in the entire world. It has been nicknamed the “Monarch of Mountains” and when measured from its base at the sea floor, it is actually the largest mountain in the entire world. Mauna Loa rises to an elevation of 13,679 feet, which is just slightly higher than than Hawaii’s tallest mountain on Maui, Mount Haleakala.

Mauna Loa last erupted in 1984, an eruption that threatened to destroy Hilo. While there is no lava flowing from here today, the volcano is closely monitored and threaten to erupt often. 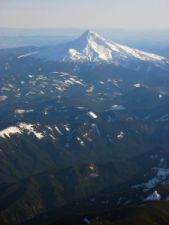 When most people envision a volcano, they think of a Strato volcano, which is a tall and cone shaped volcano (think Mount Hood outside of Portland, Oregon). These volcanoes tend to have much more dramatic and explosive eruptions (think Mount Saint Helens). See picture on right —-> 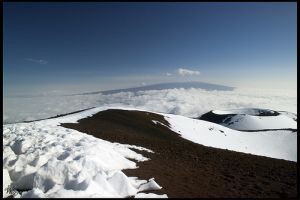 The Big Island is made up of 5 shield volcanoes, which are long and broad and have gently sloping hills. Kohala, Mauna Kea, Mauna Loa and Kilauea are the 5 shield volcanoes that make up the big island. In addition to having longer, more gently sloping hills, shield volcanoes’ lava has a lower viscosity, meaning that the lava is thinner and more fluid and which makes eruptions less volatile, as pressure underneath the surface as much. This is way the almost constant flowing lava of Kilauea can be approached and seen by visitors to Volcanoes National park.

The best way to check out the most amount if real volcanic activity and flowing lava is to do it by air. Explorers can view not only the majesty of the volcanoes, but also get a bird’s eye view of the many hidden waterfalls and the bountiful rain forest that makes Hawaii one of the most beautiful places on Earth.